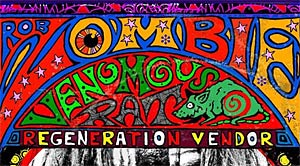 Rob Zombie just does too much. He has to be feeling the stress with The Lords of Salem being released April 19th and his new album, Venomous Rat Regeneration Vendor, getting released just a few days later on April 23rd. And leading up to all this, Mr. Zombie has released his first single (it’s a mouthful, so get ready), “Dead City Radio and the New Gods of Supertown.”

It’s actually pretty genius, the strategy to flood the media with your work all at once. If nothing else, it guarantees attention.

The track has already reached No. 21 on Billboard’s mainstream charts. That’s right, mainstream. I guess that’s accurate; he’s been pretty palatable for a few years now… more fun than shocking or hard. Yeah, we’ll always love him though.

The video seems to have taken a page from Freaks (1932), with midgets, break dancing skeletons, a belly dancer, a Scottish steampunk, (gah, and a steampunk clown), a dancing plastic chicken, a plastic-faced astronaut, and so many more strange and obscure freaks. Let’s not forget Sheri Moon’s appearance… the way she moves, man, Rob, you are one lucky dude.

It’s a beautifully shot video, and “Dead City Radio and the New Gods of Supertown” is one hell of a fun song, but (there’s always a but), as one observant poster on YouTube pointed out, there’s a striking similarity between Zombie’s latest single and The Doors’ “The WASP (Texas Radio and the Big Beat)” (1971). It’s mostly in the song’s opening and in the big bluesy ending. No doubt it was unintentional and Rob Zombie probably still isn’t aware of it.