In This Moment Release “Adrenalize” [VIDEO] 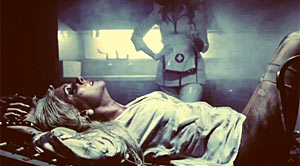 “I crave excess,” wails In This Moment frontwoman Maria Brink. And that’s exactly what she got in the new video for “Adrenalize.” The track comes off the bands latest album, Blood. The video is filled with images that echo Nazi Germany, and the tortures that go along with it. It also echoes some of Marilyn Manson’s, Rob Zombie’s, or NIN’s video work, while also leaving us with a Silent Hill or Grave Encounters 2 vibe. It is interesting that Maria plays the nurse who administers “treatment” on Maria, which has to mean something about lost marbles, self-loathing, or split personality. Whatever it is, it’s disturbing, especially with all those damn masks.

If you’d like to see In This Moment live, click through for their tour dates; they are currently on tour with Stone Sour.

Related Items: In This Momentvideo