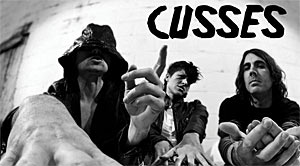 Savannah, Georgia’s enigmatic rock band, Cusses, are kicking off a U.S. headlining tour next week in support of their debut, self-titled release from HA! Records. The tour will start on April 8th in Los Angeles at Los Globos and wrap up on May 4th in Knoxville at the Preservation Pub.

Judging from the single, “Don’t Give In,” the band is more indie or alternative than it is metal. However, there are notable elements of metal and punk in their sound – and it’s a captivating sound, nearly hypnotic. Plus it’s a kick-ass video that’s totally thematic and not cliche in the least. Check it out; you won’t regret it.

The trio – Angel Bond (vocals), Brian Lackey (drums), and Bryan Harder (guitar) – has been riding a wave of momentum since the release of its eccentric rock debut. Armed with a hit video for their single “Don’t Give In” receiving regular rotation at MTVU, MTV Australia, MTV UK, and The Wedge, along with mass acclaim from fans and critics, Cusses is poised for global domination with a massive, rip-roaring album that bleeds rock ‘n’ roll.

Produced by Dan Hannon (Manchester Orchestra), Cusses snaps listeners to attention with its ferocity and engages them with its sonic intensity, which is fueled by explosive, crushing riffs and powerful, fiery vocals that the band delivers with riotous attitude and unmitigated force.

On the heels of wrapping up the first leg of their 2013 tour, Cusses waste no time in returning to the stage for another jaunt across the U.S. to do what they do best – rocking the faces off of fans one show at a time. Don’t miss rock’s hottest new trio in a city near you and pick up a copy of Cusses’ new album on iTunes or at a local indie retailer today!