Kylesa Are Back With “Quicksand” 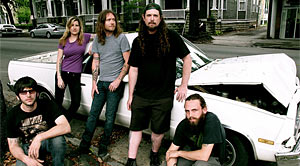 Kylesa Are Back With “Quicksand”

Kylesa has just released a new track, “Quicksand,” which comes off their new album Ultraviolet (May 28th). You can stream the new track at Spin.com.

Have you listened yet? OK, good. Now, you’ll have to forgive me, but doesn’t this track sound an awful lot like “Up the Beach” by Jane’s Addiction?

The Sludge act will be hitting the road in May as well. On May 10th, they kick it off at the High Dive in Gainesvill, Florida.

“It’s been a while since we’ve done a headlining tour in the U.S. or Canada,” said singer/guitar player Laura Pleasants, referring to the near two-year gap since the Savannah band’s last run. “We are looking forward to doing a proper tour supporting Ultraviolet. It will be good to see friends and fans (old and new) and hit these once familiar landscapes again.”

Opening for Kylesa will be Blood Ceremony, White Hills and Lazer/Wulf. “I think the package will deliver the goods as well; a little mix in the stew for everyone who digs our sound,” commented Pleasants. Tickets are available next week.