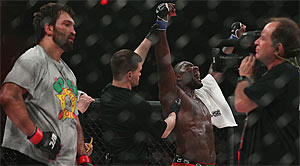 Did you happen to miss the epic battle this weekend between Anthony Johnson and former UFC heavyweight champion Andrei Arlovski?

Don’t worry because we have the highlights video of the fight right here for you to watch, courtesy of NBC Sports. This heavyweight bout was the main event held by World Series of Fighting on Saturday at the Revel Sports & Casino in Atlantic City, New Jersey.

Johnson was cleary the underdog going into this fight, surprisingly, he picked up the pace quick, beating down Arlvoski and nearly finishing him in the last few seconds of round one. It was a close call for Arlovski, who couldn’t regain any momentum in the next two round, and lost to Johnson via unanimous decision.

The next WSOF event will be held in June, and it appears that Jon Fitch will debut with the promotion in Las Vegas at a venue still to be determined.