The Walking Dead (Season 3) – “Arrow On The Doorpost” 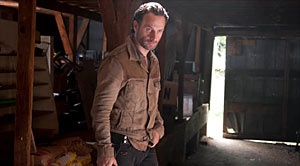 The Walking Dead (Season 3) – “Arrow On The Doorpost”

While “Arrow on the Doorpost” serves to set things up as we quickly approach the season finale of The Walking Dead, Season 3, most cast members were playing a game of “my dick is bigger than yours.”

Obviously the title bout here was between Rick and the Governor, but there were plenty of others in the tournament. Andrea tried to get into the game and got kicked out. Glenn and Maggie got into it and ended up bumping uglies. Glenn also got into it with Merle, but when Merle lost that match he taunted little Carl into it by making him worry about his dad’s life. Daryl got into it with Caesar and Milton. But the biggest dick goes to Hershel for being so deceptive and using humor as a means of not showing his stump to Milton. Hershel also gets the bigger dick for offering Andrea an out of Woodbury. Besides the dick measuring, or posturing if you prefer, Rick and the Governor met to negotiate under the pretense of trying to find peace. If I was a gambling man, I could probably find countless poker metaphors to describe some of the bluffing and shit talking that went on, but I’m not, so I won’t.

Nothing resulted from this meeting that we didn’t already know; the two parties want to go to war. Well, Rick does, while the Governor thinks the tribe will be like lambs to a slaughter. Seriously, after the first 12 minutes, I was expecting a whole lot more. Some of which was delivered toward the end of the episode, but the near-montage ending with a musical score was enough to make me puke.

With all the gauging and character analysis going on, you’d think that the Governor would have figured out that Rick, while we know he’s not a 100% on point, isn’t a sucker and will fuck your shit up. And since the Gov has spies (which he let Rick know) and knows that the tribe has an Army-sized cache of weapons, and that, by his own admittance, the tribe is battle ready and experienced versus his “numbers” that couldn’t hit the broadside of a barn, you’d think he’d be a little less cocky. Seriously, who doesn’t want to punch that fucker in the face – take him down a few notches. Fact is, the Gov is cocky and makes a lot of mistakes that could be exploited, but he knows all that I mentioned in the previous paragraph, which is why he asked for Michonne in exchange for “peace.” But while he really does want to exact revenge on Michonne for thrusting her katana sword through his zombified daughter’s head, his offer is also a trap (the lambs to a slaughter trap). However, his belief that Rick will “choose” his son, his daughter, and everyone he cares for over Michonne is a major mistake. With all the mistakes that the Governor makes, you’d think that someone would have executed his ass long ago. And more recently Andrea has had an opportunity and Rick could have easily 86’d him. But, as much as we want to see it, are those the kind of heroes we want?

No, we want the heroes that lie and put fear in the hearts of those in their charge, which is what both men choose to do, at least partially.