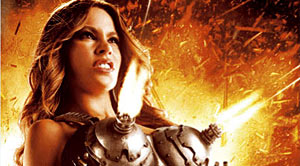 Here is a brand new look at Sophia Vergara as Desdemona in a stand-alone character poster for Machete Kills, and she shoots bullets with her boobs. How cool is that?

As you should already know, the film is directed by Robert Rodriguez (From Dusk Till Dawn, Sin City: A Dame to Kill For) from a screenplay by Kyle Ward and it is the second film in a series that is based on a fake trailer featured in Grindhouse. Machete, a former Mexican Federal, is played by the one and only Danny Trejo with Michelle Rodriguez and Jessica Alba reprising their roles from the first installment.

Machete Kills was picked up by Open Road Films in October for U.S. distribution rights, and is currently slated for release on September 13, 2013.