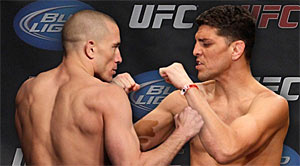 Dana White expressed his frustration with the number one contender to Georges St-Pierre’s welterweight title and said that Nick Diaz is risking his title shot at UFC 158 due to a lack of cooperation. White has stated that Nick Diaz has cost the company $50,000 because there are “guys cruising around Stockton (California) not interviewing people”. The UFC is hoping to film a UFC Countdown special promoting the UFC 158 main event, which takes place on March 16th, 2013 at The Bell Centre in Montreal.

The UFC President had this to say in a media scrum following the UFC on Fuel TV 7 post-fight press conference:

“I hope we don’t come to that. I’m close man, I’m really close. I don’t want to be. I don’t want to do this – it sucks….“All the fans are like, ‘Shut up, Dana. Let Nick fight.’ You shut up, idiots. This is how it works. This is the job. This is what we do. Go to your f–king job and tell your boss, ‘I don’t want to this or that.’ That’s not how it works. It’s part of the job. I’ve shown the Diaz brothers a ton of respect. They can show some respect back. I hope I don’t even have to think about that. It’s the last thing on earth I want to do.”

A report from MMAFighting.com confirmed that Diaz had finally fulfilled his UFC Countdown obligations. Jonathan Tweedale, who is a lawyer for the Diaz camp, contacted the website and had this to say:

“Dana is mistaken,” Tweedale wrote via e-mail. “There is no ‘crew rolling around Stockton,’ and Nick did not ‘miss’ three interviews.  ”In fact, several earlier dates were arranged without Nick’s knowledge and with no notice to Nick. When Nick learned what had happened, I assisted him in arranging a date and time directly (Thursday, February 14). Nick arrived early and was in good spirits at that February 14 date — the one and only date he knew about in advance. Nick requires things to be done in an organized and orderly manner. That is the kind of professional he is.”

Things look steady for the time being but it is apparent that White has been pushed to the brink yet again by the Stockton fighter and is not happy.