New Video Clips From The Last Exorcism Part II – Are You Watching It This Friday? 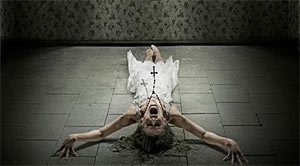 Because of the open weekend success of The Last Exorcism, which surpassed everyone’s expectation by grossing more than $20 million, a sequel was inevitable and it is finally opening in theaters this Friday.

Eli Roth once again produced the supernatural horror film that was co-written and directed by Ed Gass-Donnelly. However, Part II is shot like a traditional film, and won’t be presented in a found footage format. I find this unfortunate because that format was original for this genre and gave the film total realism, unlike William Friedkin’s cult classic The Exorcist. But since Roth is a mastermind in horror, I highly doubt The Last Exorcism Part II will suck in anyway because of the format change. In fact, Part II might just compliment the first entry, given the difference.

If you still haven’t seen any of the TV spots for Part II, and you want to get a better idea on what to expect from the sequel. We got two fresh video clips for you to check out this evening before the lame Oscars kicks off.

Also, if want to know more about the story, we got the official synopsis right below.

The Last Exorcism Part II – “Believe In Him” Clip

Continuing where the first film left off, Nell Sweetzer (Ashley Bell) is found terrified and alone in rural Louisiana. Back in the relative safety of New Orleans, Nell realizes that she can’t remember entire portions of the previous months only that she is the last surviving member of her family. Just as Nell begins the difficult process of starting a new life, the evil force that once possessed her is back with other, unimaginably horrific plans that mean her last exorcism was just the beginning.