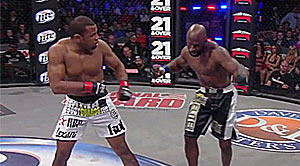 The title of this report is pretty self explanatory, and despite being a considerable favorite at Bellator 90 on Thursday night, King Mo lost via KO due to a spinning back fist in the first round by former MFC champion Emanuel Newton, who saw the victory coming.

“I saw that Mo dropped his hands a lot and coming with big haymakers, so I figured I’d duck under it.”

This was King Mo’s second fight in Bellator since he signed a contract with the Chicago-based promotion back in May of 2012, unfortunately fighting with his hands low costed him big time for a shot at the title in the Light Heavyweight Tournament. I guess King Mo didn’t take any notes on Alistair Overeem’s fight with “Bigfoot” Silva, who suffered a KO as well because he dropped his hands at all times.

Emanuel Newton now moves up in the tournament, and next Thursday will see the first title defense by Light Heavyweight champion Christian M’Pumbu at Bellator 91 LIVE on Spike TV.