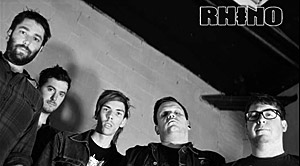 Formed in Montreal, Canada, back in 2007, RHiNO is a sludge metal band that has been secretly experimenting with its own organic sound from traditional instruments, which includes elements of post-rock and arguably hints of progressive metal.

At the moment, RHiNO is best compared to Cult of Luna in terms of vocals and music progression, however, without any futuristic sounds. Even though the band has deliberately kept themselves out of the public eye for a number of years, they recently entered the live performance phase of their career, and have previously played with bands like ESCAPE Uken!, and twice with Boston’s metal outfit InAeona. I’m guessing they just needed to work out a few musical kinks, and from what I have heard so far that time is paying off. The band’s next live venture is with Godstopper, Hammerhands, and Luther Higgs.

Aside from focusing on live gigs, RHiNO is also in the process of working on their first studio album. They have officially completed “Sandy Millstone”, the first song off the album, which is now available for FREE DOWNLOAD. The track was recorded and mixed last year by Jean-Baptiste Joubaud.

If you like the song “Sandy Millstone”, or you’re just a fan of metal music in general and find yourself in the Montreal area, I recommend that you go support RHiNO on Thursday, February 21, 2013, at Piranha Bar (680 St-Catherine Ouest) in Montreal. If you’re a local you have no reason for any excuses, so come on down for a couple pints of beer, and enjoy this band.