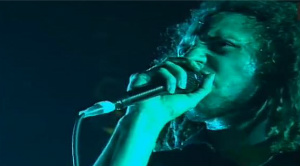 Not the first band to combine rap and hip-hop with metal, but certainly among the best and most successful at it. There were plenty of followers, but where are they now?

Emerging in 1991, Rage Against the Machine appealed to the grunge kids who were into Nirvana, Alice in Chains, Soundgarden, etc. Fact is, Rage fit into the then-called alternative music scene as well as any other band. It was a definite far cry from last wave of hair metal bands. However, Rage was offering something way different and much more technical than a lot of their contemporaries, and one could argue that they were a more important band than Nirvana.

This Dusseldorf concert took place in 2000, the year of the Rage Against the Machine’s split. They reformed in 2007, but have yet to release a new album.