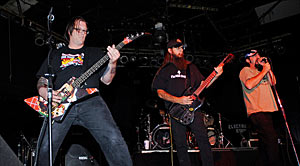 If you like your thrash with a bit of hardcore thrown in, which basically describes Suicidal Tendencies, then you’re going to love Pasadena Napalm Division.

Pasadena Napalm Division, the Houston-based thrash metal outfit that features D.R.I. singer Kurt Brecht and members of Dead Horse, will release their self-titled debut on April 9 via Minus Head Records.

“Fans of D.R.I. and Deadhorse will rejoice. PND is what Thrash Metal should sound like in 2013,” said Brecht. “Working together with some of the members of Texas-based cult band, Deadhorse, we have come up with some hard-hitting tunes that span genres and will withstand the test of time. I can’t wait to take the Pasadena Napalm Division machine on the road in support of our first LP on Minus Head Records.”

The 13-song self-titled release was recorded at the Music Lab in Austin and features guest vocals from Tony Foresta (Municipal Waste) and Argo (Dead Horse).