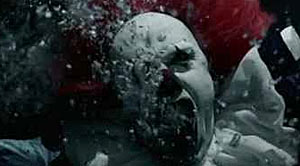 In what world does Pennywise, Leatherface, and few others appear in a commercial for tea? This one, and I’m glad I live here.

It seems the marketing team over at Herbaria, purveyors of tea, decided that they needed to tap the horror fan market. I think they’ve done a fine job. I’m not a tea drinker, but after watching this commercial, I have a craving. Jung von Matt/Neckar, Tempomedia, and director Andreas Roth put this 60-second spot together. It takes place underwater (like, a huge tea cup), and was filmed at London’s Pinewood Studios, where the underwater scenes in the latest Bond film were filmed.

As you’ll see in the commercials, our monsters are attached to the tea bag and drowned in the soothing Herbaria tea.