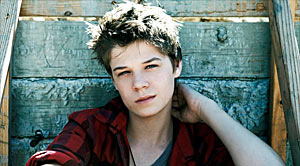 In terms of casting, CBS is on track for Stephen King’s Under the Dome TV series since announcing the series’ premiere will be on June 24, 2013.

We already know that Niels Arden Oplev (The Girl with the Dragon Tattoo) will be directing that episode from a story adapted by Brian K. Vaughan. And as of today, according to Deadline, Under the Dome has found its first regular cast member, Colin Ford, a young 16-year-old actor who previously appeared in a few episodes on the CW’s Supernatural, as the young Sam Winchester.

Colin has been officially cast to play the role of Joe, a “very smart kid who’s understandably freaked out when he discovers that the mysterious barrier covers the whole town — and both his parents are outside of it.”

Season 1 of Under the Dome is moving forward with 13 episodes, and it is based on Stephen King’s 2009 best seller of the same name.

Keep checking back on Yell! Magazine for future updates on this series.

Colin Ford – Under The Dome