The Walking Dead, Season 3 May Be In Peril 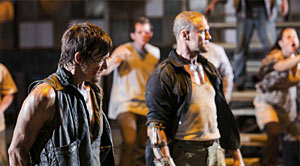 Basically, it’s become known that The Walking Dead‘s former showrunner, Glen Mazzara, was fired and not an amicable departure as we were led to believe.

The Hollywood Reporter, with the aid of inside sources, has stated that Robert Kirkman is “very protective” and “Robert wants to maintain a certain amount of his control, and AMC needs Robert for the fan base.” But it’s not just Kirkman, apparently a number of producers have had issues with Mazzara, and during production of the second half of The Walking Dead things shut down because of a lack of material to work from. So, where does that leave us, the fans?

As little as it will do, Shawn Ryan and Kurt Sutter have Tweeted their opinions and support for Mazzara. At most, their attempts will only perk up the ears at AMC, and maybe piss them off and cancel the show. Doubtful, since it’s the most popular series on television and doing so would leave a foul AMC taste in many viewers’ mouths.

Common knowledge that AMC cut Breaking Bad shorter than it should have been. Now you have creative differences w/ biggest hit’s savior?

With FX, Showtime, HBO, Starz, Cinemax, A&E, TNT and others to sell to, it’s a real question now why good show runners should sell to AMC?”

Sutter has also posted some vlogs about the issue at AMC and with Mazzara. See them below.

With all the drama going on behind the scenes, it’s a miracle that The Walking Dead has managed to keep going, much less be the biggest show on television. The worst part, again, is that it’s the fans who will suffer. The mid-season cliffhanger for Season 3 was spectacular, and it would totally suck if the second half of the season fell on its face.

What do you think of this news? If this drama continues, will you still follow The Walking Dead? Post in our comments section below.