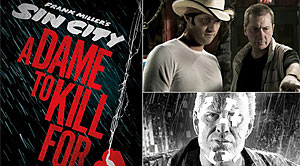 Robert Rodriguez and Frank Miller are hard at work on the Sin City sequel, Sin City: A Dame to Kill For, as the two continue to cast as filming gets underway in New Orleans, Louisiana, and Austin, Texas.

It was recently announced that Joseph Gordon-Levitt (Inception, The Dark Knight Rises, Looper) had joined the cast, and that was good. But hot on the heels of this news, it was revealed that Josh Brolin (No Country For Old Men, The Goonies, Grindhouse, The Dead Girl) and Christopher Meloni (Twelve Monkeys, Oz) would also join the cast as a cop.

What’s known is that Brolin will play a younger version of the Dwight character, played by Clive Owen in Sin City. Incidentally, there was speculation that Owen would be back for a smaller role, but that has remained unconfirmed.

Sin City: A Dame to Kill For is expected to have an October 4, 2013 release. We’re looking forward to it!