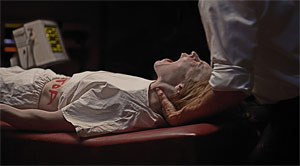 Watch the first official trailer for The Last Exorcism Part II, produced by Eli Roth along with Marc Abraham, Thomas A. Bliss and Eric Newman of Strike Entertainment.

Since 2010’s The Last Exorcism surpassed all expectations by grossing more than $20 million its opening weekend, it was no surprise that CBS Films quickly acquired the U.S. distribution rights to The Last Exorcism Part II back in November. The sequel was directed by Ed Gass-Donnelly from a screenplay by Gass-Donnelly and stars Ashley Bell, who reprises her role as Nell Sweetzer.

Continuing where the first film left off, Nell is found terrified and alone in rural Louisiana. Back in the relative safety of New Orleans, Nell realizes that she can’t remember entire portions of the previous months, with the exception that she is the last surviving member of her family. Just as Nell begins the difficult process of starting a new life, the evil force that once possessed her is back with other, unimaginably horrific plans that mean her last exorcism was just the beginning.

The Last Exorcism Part II will be released by CBS Films on March 1, 2013.