Swedish Sleaze Invades Europe For One Hell Of A Tour 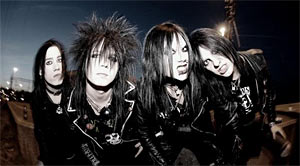 Hey, old schoolers! Ever wonder where you sleazy cock rock went? It’s probably safe to say that it emigrated to Sweden. That being said, two Swedish bands that demand your attention have just announced a tour that must be attended.

Sleazy/punk outfit known as Sister has an undeniable Misfits-ish/horror punk sound mixed with metal, and they’ll be out in support of the sleazy metallers Crashdiet, who has a Ratt meets Skid Row vibe.

About the tour, Sister has said,

“The tour you all have been waiting for is finally here! Sweden’s Crashdïet and Sister on the same stage, destroying Europe together. This trip of living hell will blow you away. Now, the Swedish invasion of Europe is a fact. We can’t wait to hit the road again and this time is gonna be something special! This will be the last part of Sister’s HATED Over Europe Tour. Next time we will be back with a new album. C’mon out and show us your hate one last time. Let Europe burn! See you on the field.”

This is totally fucking exciting! And if you ever wished that you cut your metal teeth on Motley Crue, Slaughter, Ratt, Poison, Sleeze Beez, Trixter, Skid Row, W.A.S.P., or L.A. Guns (just to name a few), you’ll want to catch this bill, or at least check out these bands.

Sister will be also give direct support on the full European tour of Crashdiet in May of 2013!