Scary Movie 5 Or A Haunted House, Or Will Both Sink At The Box Office? [VIDEO] 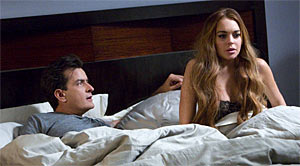 The other sad aspect of the two films is that both are a parody of Paranormal Activity. Since A Haunted House is getting released in January, and if it sinks in terms of success at the box office. I’m just wondering if it will impact the success of Scary Movie 5 a few months later. Will people really want to watch another campy horror spoof again? I’m sensing doubt because Scary Movie 5 looks like a lackluster compared to A Haunted House, but that’s just my opinion and you just never know what others will think in this god forsaken world.

Check out the trailer for Scary Movie 5, which is slated for theaters on April 12th, 2013.