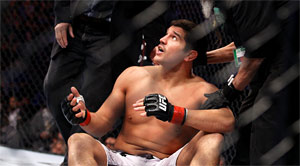 Knowing that STRIKEFORCE is officially ceased now and will never again see the light at the end of the tunnel to promote another MMA fight card with Showtime after the final event on January 12th, the next obvious step is for fighters to slowly move over to the UFC, if they wish to. In recent days some have already vowed with the Zuffa owned banner such as, Derek Brunson, who’s slated to face Chris Leben at UFC 155, and Robbie Lawler is also confirmed to meet Josh Koscheck at UFC 157.

Now another STRIKEFORCE crossover is official added to the list of names above, and will make his UFC debut inside the Octagon on March 16, 2013 at UFC 158 in Montreal. His name is Bobby Voelker (24-8), also goes by “Vicious” is expected to fight Patrick Côté (18-8) in the welterweight division, who was originally booked for a rematch with Alessio Sakara. However Sakara was forced to withdraw from the fight due to kidney issues, and afterwards “The Predator” announced to drop down to the welterweight division. Voelker recently had a three-fight win streak under STRIKEFORCE including his finish of Roger Bowling twice in a TKO.

Expect a slug fest to go down between these two fighters the same night Georges St-Pierre defends the strap against his nemesis, Nick Diaz, at UFC 158.