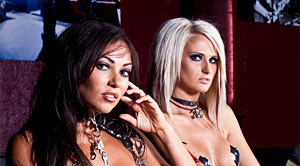 If there’s a polarizing band out there right now, it’s the Butcher Babies. On the one side, we have some decent, skull-crushing horror-themed metal. (If you listen to them without the visuals, I think you’ll hear it.) On the other side, we have two women fronting the band who are seemingly using their tits to get some attention and sell tickets. Well, I’m not going to say one way or the other, but Heidi Shepherd and Carla Harvey do perform topless with nothing but nipple tape on. You decide.

Like a lost chapter in the 2009 Rick Jacobson film Bitch Slap, Butcher Babies hit the stage like the brutal vixens they are and deliver an over-the-top performance that’s got more energy than a gym rat hopped up on roids. With songs about serial killers (“We’ll See You in Hell”), fake blood flowing, stage props, and boobs galore, the girls claim that it’s not a gimmick. I say foul. Of course it’s a gimmick, and the Butcher Babies shouldn’t be afraid to admit it. KISS has a gimmick. Alice Cooper has a gimmick. Gwar has a gimmick. Slipknot has a gimmick. Rob Zombie has a gimmick. And, last but not least, their tour mate, Marilyn Manson has a gimmick.

There’s nothing to be ashamed of in having a gimmick, but considering these women are wearing next to not enough, one has to wonder if they’re helping women in metal take two steps back. But if we question that, do we also question Otep’s integrity? Otep took the Butcher Babies on tour, after all. And now they’re on tour with Marilyn Manson (dates below), so there has to be some substance beneath the flesh.

The Butcher Babies recently released the video for “Mr. Slowdeath” (seen at the top), which is essentially a short film and proves that this band means business by bringing the horror theme from their lyrics and stage, to the screen. Heidi and Carla also have a comic book, which is just icing on the mufti-faceted cake.

Whether you approve of their image or not, if you get what horror metal or punk is about, you should be able to appreciate the music. That’s what the Butcher Babies are doing, and they’re doing it well. I’d actually like to see them on tour with the Murderdolls.