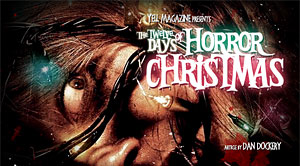 “My name is Buck and I’m here to fuck” says a young Robert Englund. He does very little of it before he’s eaten by an insane man’s alligator pet.

Possessed laundry machine and that’s about as far as it goes.

When I was 12 and saw Freddy Krueger delivering high kicks to Jason Vorhees’ chest and shoulders, I swore to myself that I’d never not get a boner again.

So far, one of the top three greatest contributions of the South, along with Cheerwine and the different ways you can eat a chicken leg. Has an amazing end credits song and a girl goes all James Bond villain on some nerd’s crotch when she reveals her metal teeth.

A gypsy fortune teller gives a hand job to a lizard-faced man in a Frankenstein outfit. I think that’s it. (?)

More people have actually seen Bigfoot than have watched this made-for-TV classic from the ‘70s. It’s your typical “boy lives in the wall and invents psychopathic fantasies” story that we see all too often these days. Would make for a poor 3-D remake.

Made before movie censors decided that people exclusively liked movies about people being really nice to other people. If you weren’t sure about your stance on little people with knives before, Freaks will help you decide.

I’m the only person in the world who seems to like this movie nowadays. Kenneth Branagh says, “They’re already dead,” referring to a ship’s group of dogs. Cut to Robert De Niro tossing dogs.

Not a “real” Frankenstein film, but it’s about people who are brought back to life by science. Once again, science fucks up, because Jean-Claude Van Damme and Dolph Lundgren can kick better than any science that man can equip.

And an Ancient Monster in The Chrysler Building

Ancient god beast declares the Chrysler Building as its new home. Michael Moriarty delivers another great, relatively unappreciated performance. And if you rag on Q because of the special effects, you’re missing the point, and always will.