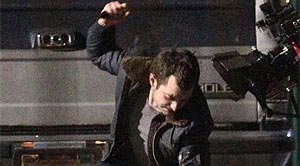 If you happen to be a fan of horror director Alexandre Aja (The Hills Have Eyes, Haute Tension) and actor Elijah Wood (Sin City), then get ready for a four-minute treat that features them in a behind-the-scenes video clip to Franck Khalfoun’s remake of MANIAC. The featurette is packed with great interviews including a good look at how the crew handled some of the elaborate POV shots used in the film. Fans of the original MANIAC will be happy to see William Lustig, who gave Aja the approval and support to do the remake, also make a short appearance in the clip.

IFC Midnight purchased the North American distribution rights for MANIAC back in August, which means a VOD release is planned very soon, followed by a limited theatrical run. As soon as we hear about those details they will be updated on Yell! Magazine, but in the meantime make sure you check out the video above for MANIAC.