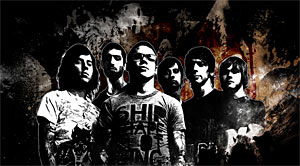 Multi-Artist Bill To Also Feature For Today, The Color Morale, And The Chariot

Ferret Music recording group The Devil Wears Prada and Metal Blade Records’ As I Lay Dying have announced details of the upcoming North American co-headline tour. The hugely anticipated trek gets underway February 22nd at Ventura, California’s Majestic Ventura Theater Half House and then continues through early April. Tickets for all dates will be on sale Friday, December 21st.

The Devil Wears Prada and As I Lay Dying will be accompanied on the epic tour by For Today (on all dates except March 7th-8th), The Color Morale (February 22nd – March 7th), and The Chariot (March 8th – April 4th). For complete details and ticket information, please visit www.tdwpband.com/tour and www.asilaydying.com/events.

The tour follows The Devil Wears Prada’s 2011 breakthrough, Dead Throne, which confirmed the band as one of the most potent and powerful in modern American metal. The album’s latest video, “Mammoth,” premiered to great acclaim earlier this year.

The Devil Wears Prada followed the release of Dead Throne with the hugely successful Dead Throne Tour: North America, captured for posterity on the recently released CD/DVD, DEAD&ALIVE. The collection includes performances of songs spanning TDWP’s career, including such fan favorites as “Danger: Wildman,” “Born To Lose,” “Kansas,” “Assistant To The Regional Manager,” and “Outnumbered.” In addition, DEAD&ALIVE features an array of behind-the-scenes footage shot and edited by the band’s own Jeremy DePoyster.

Long hailed as a genuinely electrifying live act, The Devil Wears Prada has also proven indefatigable road warriors. In addition to countless headline dates and festival sets, recent highlights include spending summer 2012 alongside Slipknot, Slayer, Anthrax, and the one and only Motörhead as one of the main stage headliners on the all-star Rockstar Energy Drink Mayhem Festival.

As I Lay Dying

As I Lay Dying preceded the release of their sixth full-length studio album, Awakened, with a highly successful run on 2012’s Rockstar Energy Drink Mayhem Festival where the band rotated between the side and main stages. Just before Awakened dropped on September 25th, the band released their first production video for the album for the track “A Greater Foundation.” Fans instantly took to the Internet to express their love of the new song – AND to discuss the relevance of the lyrics.

As I Lay Dying – “A Greater Foundation”

The five-piece San Diego, California-based metal act, As I Lay Dying, recently concluded their run on the Monster Energy Outbreak Tour where they toured alongside Asking Alexandria, Memphis May Fire, and Attila, including a stop at the hugely successful California Metal Fest where the band electrified the stage and decimated metal fans with their powerful and blistering live set that the band is known for.