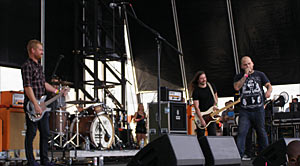 As the bands looks forward to the release of their new album in the new year, they have released the promo track “Ribcage,” which you can stream at soundcloud.com or download at iTunes or Amazon. The single is also available on 7″ with the previously unreleased B-side “Into the Black” at thebronxxx.shop.musictoday.com.

“We made an effort to trim the fat and focus the ideas a lot more. It helped that we’re working in our own studio, with our friend (producer/engineer) Beau Burchell, and that we know what we want to do and how to get there very quickly.”

And as vocalist Matt Caughthran explains,

“This represents the highest evolution of the band, which is exactly how it should be be. We’re the same guys, but we would never make the same record twice. And because of everything that’s happened with El Bronx, we’ve grown as musicians. And that’s why on this record you’ll hear that the songs are driving everything.”