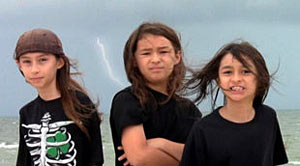 Remember Balloon Boy from a few years back? The kid who floated away in helium-filled balloon and caused a media frenzy? Well, the boy’s name is Falcon (fitting, eh?) Heene, and now he’s fronting his very own heavy metal band, called the Heene Boyz (yes, it’s a band of three brothers).

Falcon is the youngest member of the band, and collectively they name their influences as Iron Maiden, Black Sabbath, Dio, Metallica, to Disturbed, Linkin Park, Van Halen, and more. The Heene Boyz have a debut album out, called Chasing Tornadoes, and by the sounds of the introductions in the video they might actually be able to play — even if Falcon sounds a bit like Keanu Reeves’ Ted from Bill and Ted’s Excellent Adventure. The title track might leave something to be desired, but they are just kids.