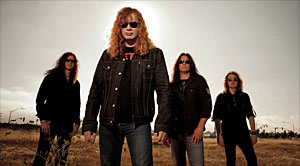 Last year, when we interviewed Megadeth guitarist Chris Broderick, it was hinted at that the band would soon be done with Roadrunner, but out of professional courtesy, we left that out of the interview. It’s been no secret that Dave Mustaine has been unhappy with the label. Back in 2009, the frontman stated,

“Now, I am going to be forced to rely on my own radio station to play Megadeth, but that’s ok, I seem to be doing the label’s job everyday, in every city, and I am used to it after these last two records.”

However, dear Megafans, this bit of bad news about Roadrunner Records comes with some good news. First, Megadeth are getting ready for their Countdown To Extinction 20th Anniversary Tour and they’ve gone into the studio to begin work on the next album.

Megadeth is also up for a Grammy for the track “Whose Life (Is It Anyways?)” from the 2011 album Th1rt3en. The Grammy category for Best Hard Rock/Metal Performance also sees Anthrax, Halestorm, Iron Maiden, Lamb Of God, and Marilyn Manson in contention.