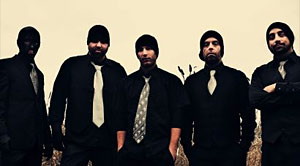 We reviewed Fallstaf’s album Bastard Sons of a Pure Breed a while back, now the creepy brass-metal outfit is back in the studio and have just released a new video and single. “Miller’s Crossing” is a grainy video depicting the band putting a nameless victim in the trunk of their car, driving him out to the woods, and we’re led to believe that they will be shooting him. However, the gunman turns his gun on someone else and our victim is left in the woods, but he gets up and walks away. One can only assume that this video was left open for a sequel, which could lead us to believe that the follow-up album will be a concept album.

I’m still not sure how far Fallstaf will go with their blending of genres and sounds, but I appreciate the effort that they’re giving to create something original.

Check out the video and let us know what you think in the comments section below.