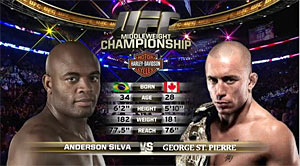 UFC Welterweight Champion, Georges St-Pierre, is without a doubt pondering his options for his next fight inside the Octagon since he defeated Carlos Condit in the main card at UFC 154. While he has a few to consider, the first and foremost option is for GSP to take the Johny Hendricks fight, in my opinion, who proved to be the No. 1 contender in the division when he KO’d Martin Kampmann in 46 seconds in his latest battle. With two knockouts discharged in the first round during three recent UFC events, an outstanding fight record, and a heart of a champion. How can anyone debate his shot at the title next? Some have already concluded that Hendricks shouldn’t be next in line due to the caliber of fighters he faced, unlike Nick Diaz.

Having that notion in mind, the second obvious option is for GSP to take the Nick Diaz fight, which was originally scheduled to happen last year, but with Diaz’s lack of interest doing pressers, he was quickly replaced by Condit due to a no show . This also sounds like the other fight most MMA fans want to see happen over Hendricks, including GSP’s trainer Firas Zahabi from Tristar Gym, who believes Diaz deserves the title shot the most.

“He [Diaz] climbed up the ladder all the way. Johny deserves it very much, but Diaz has been there longer and done more fights and has bigger wins.

If you want to be really fair about it, he is the guy who beat the most amount of names in the biggest fights.”

Third and most talked about option is the superfight against UFC Middleweight Champion, Anderson Silva. This is the fight everyone wants as a Christmas gift, including me, but speculations coming from GSP isn’t giving fans want they want to hear. He already expressed the weight difference is a big issue for him, and clearly wants the match-up to go down on his terms only. The following statement alone is enough to make us believe the Silva vs. St-Pierre fight won’t happen anytime soon, but not to say never.

“I have things to do at 170 pounds. When I am ready and when I want the fight, that’s when it will happen.”

Considering all these options for him to think about since the unification of the welterweight strap on November 17 at the Bell Center in Montreal. Ariel Helwani from MMA Fighting recently reported that even Anderson Silva’s manager, Ed Soares, believes the much hyped superfight will never happen based on all of the statements GSP has provided in interviews.

I’m kind of starting to believe this myself now, but do you have high hope the superfight between Silva and GSP will be slated in 2013? Let us know in the comments section below.