Every Time I Die Tour Dates 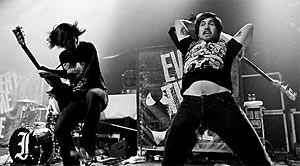 They might be metalcore, of which I’m not the biggest fan, but at least their lyrics aren’t emo-centric. Also, I kind of hear Fugazi in them, and that’s awesome in my books.

Last March, Every Time I Die released their latest effort, Ex Lives, and now they’re on an extensive tour. Check out the press release and tour dates below.

Also, a song title like “Underwater Bimbos from Outer Space” is worth the price of admission alone.

December 4, 2012 – Los Angeles, CA – Revered purveyors of metallic mayhem Every Time I Die have announced plans to take their rousing live show on the road for a series of headlining dates with Massachusetts metalcore band The Acacia Strain in 2013. The band will also be joined by post-hardcore band Vanna, Hundreth, and No Bragging Rights. The band will hit the road starting Wednesday, February 6, in Chicago, IL. Tickets go on sale starting Friday, December 7th. All on sale times and locations can be found on Every Time I Die’s Facebook page.

Buffalo’s magnificently brutal heavy rock ensemble Every Time I Die will be out on the road in continued support of their powerful and critically acclaimed album, Ex Lives, which hit 20 on Nielsen Soundscan this past March. The record was produced by renowned heavy rock producer Joe Barresi (Tool, The Melvins, Queens of the Stone Age, Parkway Drive) and contains magnificently heavy and cathartic onslaught of modern hardcore infused metal. Ex Lives is the band’s sixth full-length studio album and much anticipated follow-up to their 2009 breakthrough New Junk Aesthetic, which Absolute Punk heralded as a musical “weapon of mass destruction.”

Every Time I Die Tour Dates:

Related Items: Every Time I DieTour