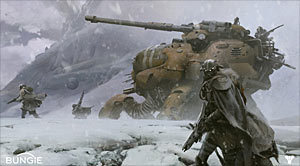 The recent report on a leaked document handled by an advertising agency that’s associated with Bungie’s upcoming title rumored “Destiny”, have been confirmed by the developer to be authentic details on the games story. According to Gamespot, the document describes Destiny as a “fun and accessible” game with a “deep, tangible and relatable” universe similar to the one in Star Wars. Since the leak of the games plot, which came with a cool concept art pictured above, Bungie stated that they’re not ready to officially announce the new game yet, but to stick around because they have something staggering to show us soon.

Bungie also told IGN the following in regard of the early leak:

“We’re not quite ready to take the wraps off our next universe, but in light of recent events we thought we’d give fans something a little more official over at Bungie.net. Feel free to drop by and say hello! There’s much more to come.”

According to another report in May, documents suggest that Destiny will be released for the Xbox 360 in 2013, and the PlayStation 3 will get a release slated for 2014.