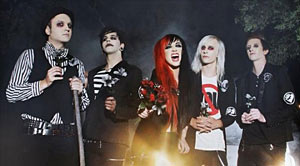 L.A. goth rockers, with tons of pop sensibilities, New Years Day have just released the lyric video for the digital single, “Do Your Worst.” Considering vocalist Ashley Costello actually appears in the video, this lyric video goes above and beyond the norm. “Do Your Worst” could have done worse, but it has a creepy intro, a great hook, and a great sound. And the rasp in Ashley’s vocals is amazing, if it doesn’t conjure memories of Joan Jett.