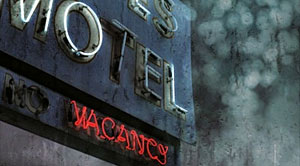 It’s a Hitchcock renaissance. Psycho recently turned 52, Hitchcock (starring Anthony Hopkins) is about to hit theaters, and now A&E is feeding the promotion machine with news about its upcoming series Bates Motel, starring Freddie Highmore as the young Norman.

Bates Motel is expected to commence a 10-episode run in spring 2013. If the pilot season is as successful as The Walking Dead’s was, this could be a hell of a series. Good thing the show is set in the present day, with cell phones and Manga, and Norman Bates is a strapping young lad at 16 years old, giving him time to grow into an oedipal killer.

Showrunner Carlton Cuse (LOST) has stated that “The town itself is very much a character in the show… There are a lot of secrets that lurk beneath this bucolic veneer.”

This film intends to give viewers an intimate understanding of how Norman Bates’ psyche developed from his childhood through his teen years. Fans will have access to the dark, twisted backstory and learn first hand how his mother, Norma, and her lover damaged Norman, helping forge the most well-known serial killing motel owner in history.

Insights from the script reveal that the whole family is introduced, including Sam Bates (father), Norma Bates (mother), and Dylan Bates (brother). Also, the Bates Motel isn’t open yet, Norma is a slut, the mother-son relationship will make you uncomfortable, Norman first group of friends in his new town is a group of girls, and there’s a rape scene somewhere.

If this isn’t a Hitchcock renaissance, it’s surely a sign of our love of horror, and we’re onboard.