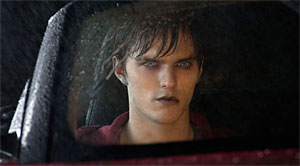 Do you love zombies? How about zombies mixed in with some romance and comedy? That, my friends, is called a “Rom-Zom-Com,” and this so-called genre was introduced by Edgar Wright when he spoofed zombies in his feature film, Shaun of the Dead. At the time of its release, it was a hit at the box office and received critical acclaim by various pioneers in the industry such as, Stephen King, George A. Romero, and even Quentin Tarantino, who listed Shaun of the Dead as one of his top 20 films made since 1992.

But the film everyone is talking about now isn’t Shaun of the Dead, but another romantic comedy featuring lots of zombie love. Warm Bodies is a film based on the novel by Isaac Marion and it promises to walk (or shuffle) a similar path in the genre as Shaun of the Dead did. Warm Bodies isn’t released yet, but slated for a February 1, 2013, release.

Warm Bodies indeed looks like a fun film, and perfect for a night out with your loved one, or even for that first date, as matter of fact. I’m already convinced this is going to be a great film with lots of laughter attached to it. If you still have some doubts about it, just read some of the details I pulled from the synopsis of Warm Bodies below.

One day, R (Nicholas Hoult) and his best friend M lumber toward the city in search of food. There, R first sets his eyes on Julie (Teresa Palmer), a beautiful human. Determined to save her — first from the other Zombies and then from the Boneys — R hides her in his home, a cluttered 747 aircraft. Julie is terrified, and R’s grunted assurances of “Not… eat” do little to calm her. But when R begins to act more human than Zombie, coming to her defense, refusing to eat human flesh, and even speaking in full sentences, Julie realizes that R is special.