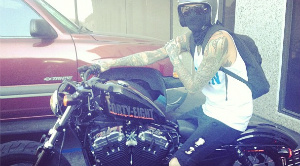 Mitch Lucker of the metal band Suicide Silence died yesterday, November 1, 2012, of injuries he sustained in a motorcycle accident.

On Halloween night, at 8:55, Mitch lost control of his Harley Davidson. In deciphering various reports, it sounds like he was ejected from the bike and then he slammed into a light pole while his motorcycle continued down the road before hitting a pick-up truck. No one else was injured.

Police are investigating to determine if alcohol was involved.

There’s no easy way to say this. Mitch passed away earlier this morning from injuries sustained during a motorcycle accident. This is completely devastating to all of us and we offer our deepest condolences to his family. He will be forever in our hearts.
R.I.P. Mitchell Adam Lucker – We Love You Brother

At D-TOX Rockfest 2012, we interviewed Mark Heylmun, but we also met Mitch. From what we could tell Mitch was a genuine guy, unpretentious, and a fan of the music and scene he was in. He didn’t hide backstage and watch shows from the edge of the stage, no, he was out mingling with the crowd. We recognized him as he was doing some shopping in a merch tent, and he was more than welcoming to our chatter, so much so that he invited us to an after party.

Suicide Silence was an up-and-comer in the metal scene and there’s no doubt that metal lost someone special. Our sympathies go out to the band, as well as to Mitch Lucker’s friends and family.