Killing Zoe Director Signs Up For Film Adaptation Of Wolfenstein 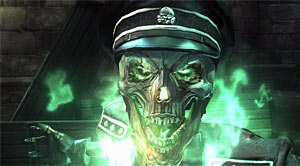 You may be asking yourself, “Who the fuck?” If you really don’t recall his name, it’s Roger Avary, a writer/director who was overshadowed by Quentin Tarantino in the ‘90s while he co-wrote such films as Resevoir Dogs, Pulp Fiction, and True Romance. Avary made his directional debut with Killing Zoe, an action-packed heist film that was critiscized as being “Tarantino-esque.” However, it still won the Grand Prize award at the 5th Yubari International Fantastic Film Festival in 1994. He moved on to direct two more films after that, including a TV special titled Mr. Stitch.

It’s been eight years since Avary was at the helm of a project — until now.

Yesterday, Panorama Media and Samuel Hadida released a press release stating that the production of Castle Wolfenstein has started, a film that is inspired by the iconic game franchise created by id Software. The game spawned numerous sequels over the years with Wolfenstein, for the PlayStation 3 and Xbox 360, being the latest one. Additionally, Castle Wolfenstein is written and directed by Roger Avary with Hadida serving as producer through his Davis Films Productions.

Avary had this to say,

“I’ve been playing the Wolfenstein games since I was a kid, and feel that their outlandish sensibility has deeply influenced my own writing and directing throughout my career. I have always thought Wolfenstein, transformed and opened for the screen to wider audiences not familiar with the games, would be a major cinematic experience, which is why I introduced it to Samuel. He bought the rights, and I could not be happier that we are now embarking on this adventure.”

“The film involves a classic assault on the bad guys, who are nominally Nazis, more evocative of Inglorious Basterds than the actual World War II. It is a vaguely futuristic retro world as fun as Captain America, which has recently been reintroduced to the world audience with great success.”