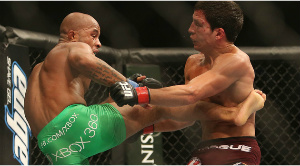 While UFC entrance music should certainly serve to motivate the fighter, it’s no guarantee of victory – no matter how bad-ass the song might be. What’s surprising is how shitty and uninspiring many of the songs are, which is why Yell! Magazine is here – to weed out the crap and present the good stuff.

Joseph Benavidez
In his match against Demetrious Johnson, Benavidez’ UFC entrance music was Ted Nugent’s famous “Stranglehold.” While it’s a signature song for the Motor City Madman, and by title alone it appears fitting for a walkout jam, but the truth is that it’s much more misogynistic.

Brian Stann
Brian Stann entered his match against Michael Bisping with “Diamond Eyes” playing, and the “Boom-Lay Boom-Lay, Boom!” chant sounds perfect for any bloodsport. The song also appeared on the soundtrack of one of our favorite action movies, *The Expendables.

Roger Hollett
While “Ruff Ryders’ Anthem” is from 1998 and it’s been awhile since anyone has heard from DMX, it didn’t stop Roger Hollett from using it as his entrance music against Matt Hamill. Maybe his selection has something to do with being from the Maritime region of Canada.

“Back in Black” by AC/DC

Igor Pokrajac
What sport hasn’t had this AC/DC classic thrown at it? Apparently not enough in Croatia, which might explain why Igor Pokrajac used it to walkout as he prepped himself to face Vinny Magalhães. Still, there’s not a bone in my body that hasn’t tired of this song… and there’s a reason it’s a sports anthem — it kicks ass.

Seth Baczynski
Yes, Eminem is invoking the boxer James J. Braddock for his song “Cinderella Man,” but that’s OK; boxing is a pugilist sport, which makes it viable UFC entrance music. Seth Baczynski used it at UFC 152 for his bout against Simeon Thoresen.