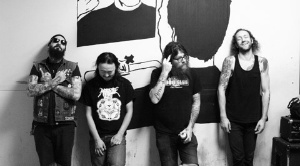 Long, groovy, and doomy tracks in the same vein as early Black Sabbath or Helmet and double-time punk-influenced tracks is what’s on offer on the upcoming album Lovelessness from Canadian metallers Bison BC. If, while listening to Lovelessness, you can’t see yourself either standing on the sticky floor at the back of a dark and dingy club bobbing your head with a beer in hand or fighting for supremacy in the pit, then you’re either not old enough or you’re not much of a metal fan.

With an October 22 release date, this moody, trippy, creepy, heavy, and furious album is just in time for Halloween and could easily become a regular on an autumn rotation (I always like to play Type O Negative’s Bloody Kisses in the fall).

Bison BC – “Last and First Things”

If you liked either of the tracks presented here, and I think you did, then you’re definitely gonna want to check out all of Lovelessness when it becomes available.

Check out the press release below to learn a bit more about Bison BC and Lovelessness.

[sic]In the great Canadian spirit of loss and heartache, the downer foursome known as Bison BC have managed to scourge their rotting brains desperately puking out new psalms of suffering. Akin to a lunatic writing their opus on the bedroom wall with their own shit comes this strange noise from the west coast melting pot of shit and failure; in a country based on terrifying distance and lonesome, stoic suffering. Lovelessness does not portray the death of love or the lack of the same. Rather it attempts to map out the pathetic and desperate pursuit of love, which in itself becomes violent like a cancer, an assault on anything that is good in the world. A heartfelt repulsion towards anything that could bring pleasure, because with happiness we suffer truly – the wanting of more. Gluttons! Pigs to the trough! Lead us to treachery! Lead us to solitude!

Bison BC worked with acclaimed producer Sanford Parker at Soma and Electrical Audio Studios in Chicago to record Lovelessness. Parker is best known for his work with bands such as Yob, Pelican, Rwake, Yakuza, Nachtmystium, Zoroaster, Unearthly Trance, and more. Needless to say, Parker is more than qualified to put-to-tape the raw, furious energy that is Bison BC