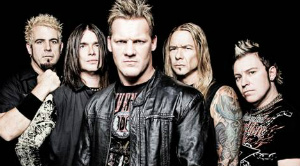 Fozzy has just released its video for “Sandpaper,” which comes from the latest album, Sin and Bones.

While it’s hard to believe that anyone thought singing about sandpaper was a good idea, Fozzy obviously did. The video Fozzy has made for “Sandpaper” has some cool elements though. For starters, it opens with an Evil Dead feel to the camera work and ends with man-eating plants, a la The Ruins, by Scott Smith.

I don’t normally rip on something that I don’t like, my mom raised me right and taught me not to say anything at all if I didn’t have anything nice to say, but this song is gay. Even the video is gay when it shows the band playing in a cabin in the woods. Lead singer and WWE star, Chris Jericho, looks so out of place; he looks like a muscle-bound businessman slumming it with a rock band as he tries to capture a youth he missed out on.

That’s my take. Watch the video and make your own decision, and if you dig it (even as a guilty pleasure), make sure to catch Fozzy on tour. Let us know what you think of the video for Fozzy’s “Sandpaper” in the comments section below.