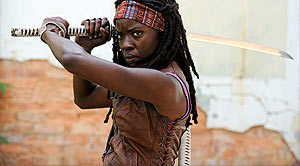 The first eight hours of The Walking Dead Season 3 begins in less than two weeks. While some of us have nothing great to keep us busy with until it kicks off on Sunday, October 14, at 9/8c, AMC has just released a new and horrifying trailer to keep sad lives interesting and our hopes high for some more zombie madness. Season 3 of The Walking Dead will be 16 episodes long, but the season will be broken up in two-parts with the second half returning February 2013.

As you already know, Season 3 takes place at “The Prison,” also known as the West Georgia Correctional Facility, where the survivors of Season 2 settled in for seven months, according to the story.

So far this season looks action-packed with tons of stunning zombie effects by Greg Nicotero, and we can’t wait for it to all begin shortly.