As I Lay Dying’s Awakened Is A Charting Success 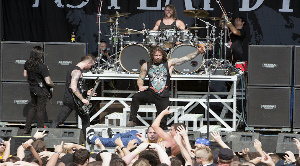 As I Lay Dying – Credit: gregcphotography.com

If you keep up with these sorts of things, you’ll be interested in knowing that As I Lay Dying’s latest studio effort, Awakened, is destroying the charts as critics are praising this album to high heaven.

Well, I still stand behind my review and will say that this isn’t the best album from As I Lay Dying. Sure, it’s a good album, but it doesn’t appeal to me, at least not entirely.

See the statement below for chart positions and tour dates.

[sic]
The brand new album, AWAKENED, from San Diego, CA’s devastating metal act AS I LAY DYING has debuted on the Billboard Top 200 Albums chart at #11, selling over 28,000 copies in it’s first week in the US alone. This is quite an accomplishment for the metal group who was up against five superstar new releases that all landed in the top ten. Other Billboard debuts include a #1 entry on the Hard Music chart (The Powerless Rise debuted at #3), #6 on the Rock Album chart where the band was up against releases from Mumford and Sons, Green Day, and No Doubt, and #3 on the Independent chart. In Canada, AWAKENED debuted at #12 on the Top 200 Current Album chart, #2 on the Hard Music chart, #11 on the Top Digital Albums chart, and entered iTunes charts for release date coming in at #1 on BOTH the Rock charts and Metal charts and #10 on the Top 200 Current Albums chart.

Chart entries for AWAKENED didn’t stop in North America though. In it’s first week of release in Germany, AWAKENED came in at #21 in German Media Markt / Saturn Charts and #47 in its second week. AWAKENED also landed the at #21 in the German Media Control Top 100 Album charts, which marks the best chart entry in Germany for AS I LAY DYING to date. Other notable European chart entries include landing at #26 on Austria Media Control Top 75 and #52 on Swiss Hitpararde.ch Top 100 with the album debuting in three UK charts including #134 on the Indie chart, #19 on the Rock Albums chart, and #10 on the Metal Albums chart marking the band’s highest sales in the territory to date.

Next up for The Grammy-nominated group, AS I LAY DYING will launch a European tour October 15 with Trivium, Caliban and Upon A Burning Body before returning to the U.S. to hit the road as a part of the 2012 Monster Energy Outbreak Tour. AS I LAY DYING will be joining headliners Asking Alexandria on the North American tour that kicks off in Edmonton, Alberta, on November 16, and wraps on December 16 in Tampa, Florida, with support coming from Suicide Silence, Memphis May Fire and Attila.

As I Lay Dying – Tour with Trivium, Caliban, Upon A Burning Body

Related Items: As I Lay DyingAWAKENED