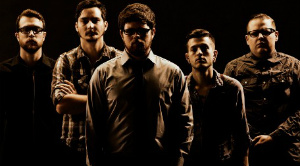 Formed in 1999, Becoming the Archetype released its first full-length album in 2003 (the band was named The Remnant at the time). After the release of that album, the band signed with Solid State Records and has since released five albums. The most recent album being, I Am, from which comes the track “The Time Bender” and it’s accompanying video (seen above). The video for “The Time Bender” is nothing short of spectacular. It has a great premise, it has a bit of cheese, it has fun, and it has style. If you like Frank Miller’s style in Sin City or The Spirit, then you’ll probably enjoy this video. The comic book style in the video is obvious and the contrast between black and white and bright colors is thrilling, as it always is. What really grabs me, though, is the elevator scene; it was totally unexpected and had me laughing pretty hard.

The actual “The Time Bender” song is good too, which is probably beneficial to the rewatch value of the video. The solo riffs are technical, the vocals are brutal, and the blast beats, well they’re blast beats.

Let us know what you think of either or both the video and the song, “The Time Bender.”