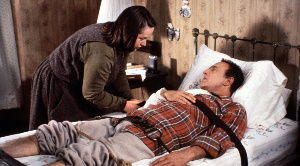 Surely we all remember the film adaptation of Stephen King’s Misery. You know the film: crazy fan lady, abducts favorite writer, ties him to a bed, forces him to write her favorite character out of the grave (at least I think that’s how it went), uses a sledgehammer to break his ankles.

The Bucks County Playhouse in Pennsylvania will bring Misery to the stage this fall, running from November 24 to December 8. Sure, it’s not Broadway, but it sounds like a lot of fun and it’s possible that this is a play that is headed for bigger venues. The thing I’m most curious to know, however, is if the producers of the play have managed to secure a set of sheets like those in the film. Seriously, check those beauties out. For real though, I want to know how the famous sledgehammer scene will get played out on stage.

On its website, Bucks County Playhouse states that the play is based on the book rather than the film, which starred Cathy Bates and James Caan, and was directed by Rob Reiner. I guess that makes the stage adaptation of Misery a reimagining.

While the cast hasn’t been established yet, Will Frears is set to direct and Warner Bros. Theatre Ventures and Castle Rock Entertainment are behind it. I’m predicting that the 11 show theatrical run is going to be a smashing success. I’d see it if I were you and within proximity of the venue.