[REC] Retrospective: Are These The Best Zombie Movies In Recent Years? 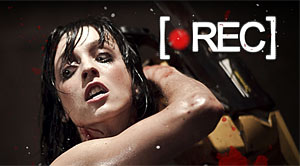 The [REC] films combine zombies with the first-person and found-footage styles of filmmaking (the two most overused things in the horror genre right now), and, in the case of [REC] and [REC]2, makes it work very well. Actually, it’s so popular now that sign language for “zombie film” is miming pushing aside DVDs to make more room on a shelf. Sign language for “found footage” is usually beating up a director until they make an actual damn movie.

Luckily, [REC] and [REC]2 rule. You’d think that since they are Spanish (and thus pushed together with every other “let’s drink coffee, mumble, and stare at each other” foreign horror film in the market), they’d be too full of someone’s masturbatory artistic flourishes to be scary. Directors Jaume Balaquero and Paco Plaza do indeed have artistic inclinations, and they are all inclined toward kicking ass. The [REC] films are the best zombie films to come out in a long while, even if the third in the series is a step down from the previous two. [REC] concerns a news crew, firefighters, police officers, and various tenants being quarantined in an apartment building because of an infection inside. The source of the infection is, at first, unknown, but the film combines gore, thrilling sequences, and a decent unveiling of the genesis of the virus to keep audiences entertained. It is consistently scary and consistently awesome.

[REC] also spawns the Spanish counterpart to Daryl Dixon with the firefighter, Manu. Manu doesn’t take shit from the undead, and he is constantly willing to display this fact. He handles zombies in a very straightforward manner.

First, an old lady zombie screams in the hallway. Manu, being proactive and sensing a worthy opponent, rams the end of an ax into her mouth. When she doesn’t go down, he chops her to death. Manu’s application for being a firefighter was just a map to where the person who held the position before him was buried.

Manu’s second act of amazing was to punch a zombie in the mouth. And that zombie hits the mat. People wrestle with zombies and get taken down fairly easily in this film, but since a punch from Manu makes your brother wonder why he woke up with a split lip, it’s only natural that he’d combat zombies with all the subtlety of a cyclone making love to a battleship.

The third thing Manu displays is his love of equal opportunity. If a normal person can get choked to death, then why can’t an infected person? Manu tests this theory and strangles a zombie to death. The disease is spread through saliva, but since Manu can’t make out with a girl without getting her daughters pregnant, he’s not afraid of simple spit. To Manu, every handshake could be defined as “close combat.” When Manu has sex, it’s the most awkward Bigfoot encounter that the hotel maid has ever walked in on. A romantic evening for Manu is fighting every guy on the subway who even looks at his date.

Continue reading the [REC] Retrospective after the jump…