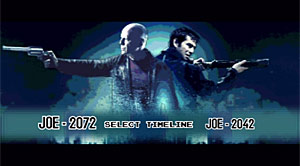 Here is something visually neat to look at this evening, but I have a strong feeling some folks will pass up on this post, and move onto something with a bit more depth.

If your an old-schooler like me, you grew up on 8 bits and played the best-selling video game console of its time, the one and only Nintendo. The NES was also the console that set the standard, and helped revive the video game industry after the 1983 crash. But enough history. I assure you that you’ll get a strong feeling of nostalgia as you view this fantastic 8-bit trailer created by Deepak Chetty for the upcoming sci-fi film, Looper. The film, directed by Rian Johnson, has a time-travel plot and stars Bruce Willis, Joseph Gordon-Levitt, and Emily Blunt.

Check out this unique trailer for Looper, and make sure you watch the official movie in theaters on September 28, 2012.