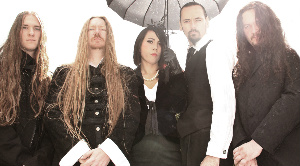 If you like the doom offerings from Black Sabbath or Typo O Negative, and you haven’t yet heard of My Dying Bride, you owe it to yourself to give them a try. Especially with an upcoming new album.

YORKSHIRE, ENGLAND – UK doom hero, My Dying Bride, has launched several pre-order packages for its forthcoming opus, A Map of all our Failures, via the Peaceville webstore. Due out in North America on October 16th, fans can pre-order the special edition CD/DVD and double vinyl versions, as well as multiple bundle packages, today at BurningShed.com.

A step up from 2009’s For Lies I Sire, which set and subsequently met new heights of expectation placed upon the legendary Yorkshire doom troupe, A Map of all our Failures is a further voyage into the darkest depths of humanity, religion, folklore, love, and death. My Dying Bride’s distinctively sumptuous dual guitar melodies effortlessly flood into juggernaut doom metal riffs, with the vocals of Aaron Stainthorpe weaving a rich tapestry of tragic tales into the accompanying soundscapes. A Map of all our Failures is perhaps best and most effectively summarized by guitarist Andrew Craighan, who describes the album as, “a controlled demolition of all your hopes.”

The album recording and mix was recently completed at Futureworks Studios in Manchester, UK, with long-standing production maestro, Mags, at the helm.

A Map of all our Failures track listing:

1. Kneel till Doomsday
2. The Poorest Waltz
3. A Tapestry Scorned
4. Like A Perpetual Funeral
5. A Map of all our Failures
6. Hail Odysseus
7. Within The Presence of Absence
8. Abandoned As Christ

The band will embark upon a European tour in December in support of the album, as well as a local appearance at the UK’s esteemed Damnation Festival in November, at which Peaceville will be a proud sponsor to coincide with the label’s 25th anniversary.

My Dying Bride is: