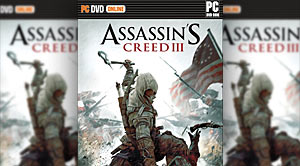 The long wait is almost over for PC owners who always seem to get their hands on a copy of Assassin’s Creed last.

Ubisoft just announced that the PC version of Assassin’s Creed III will be coming out on November 20, 2012 in North America while consoles (PS3, Xbox 360) get an earlier release of the game on October 30th in the US, and October 31st in Europe.

It sucks, and we know it, but at least the wait isn’t as long as when the first Assassin’s Creed hit PC five months after the console release. As you can tell the gap is shortening with every new release in the series, and maybe one day PC owners will experience the game at the same time as everyone else. Let’s just hope for that day to come soon!

In the meantime, stand fast, and check out Yell! Magazine for more daily updates.