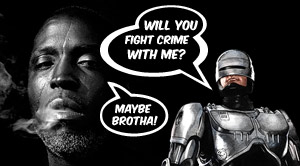 Are you sick of hearing about reboots, and all? Well, get over it because Hollywood isn’t listening to you, and they’ll keep on pumping them out if you continue to hand them your hard earned money. Just face the fact, the Robocop reboot is moving forward, and filming begins next month in Toronto at the Pinewood Studios.

Director Jose Padilha (Bus 174) is attached, including the following actors who have signed on to do the reboot, Gary Oldman, Joel Kinnaman, Samuel L. Jackson, Jay Baruchel, and Hugh Laurie.

Now on the latest in casting, THR recently reported that Michael Kenneth Williams is negotiating a deal for the role of the cop partner to Joel Kinnaman, who plays Alex Murphy/RoboCop. Williams is currently best known as Omar Little on HBO’s The Wire, and he plays racketeer Chalky White in Boardwalk Empire.

In RoboCop, the year is 2029 and multinational conglomerate OmniCorp is at the centre of robot technology. Their drones are winning American wars around the globe and now they want to bring this technology to the home front.

Alex Murphy is a loving husband, father, and good cop doing his best to stem the tide of crime and corruption in Detroit. After he is critically injured in the line of duty, OmniCorp utilizes their remarkable science of robotics to save Alex’s life.

He returns to the streets of his beloved city with amazing new abilities but with issues a regular man has never had to face before.