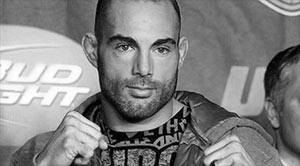 AFTER TWO YEARS AWAY, MIKE SWICK RETURNS TO THE OCTAGON

On the same card as four light heavyweight warriors compete to be next in line for a UFC title shot, one athlete has already overcome enormous obstacles to simply be competing on the UFC On FOX card (live at 8pm ET/5pm PT) live from Los Angeles.

By the time he steps into the Octagon at the STAPLES Center it will have been been two years, five months and 30 days – 911 days in total – since welterweight contender Mike ‘Quick’ Swick, 14-4, last fought. A seven year veteran of the UFC and one of the original ‘Ultimate Fighter’ cast members, the popular Texan has battled a series of health issues including a condition called esophageal spasm which threatened his career. Swick on his illness :

“I would wake in the night feeling like I had a heart attack. I wasn’t getting any sleep at all during camps or even during the week of fights. I got misdiagnosed a couple of times but eventually they found it was esophageal spasm, which would give me cramps and pains when I was trying to sleep.

“I never thought about wanting to quit myself. But there was a time where I thought my career might be over, talking to the doctors. If I couldn’t eat like an athlete, if I couldn’t rest my body, I was finished. But, slowly, I learned to control the condition through diet. The only thing diet-wise that is different for me is I miss all those great foods that taste good. Career wise, it is under control.”

On finally getting back to Octagon:

“I think in a way I’ve preserved a lot of my athletic prime while dealing with my health issues. Over the last two years I’ve not taken any damage to my body or head in a way that eight or 12 fights would have done. Even though I had to miss out on all those fights, I feel I’m coming back more healthy than ever. I’m faster than I’ve ever been, I’ve worked speed non-stop for two years, and I’m more motivated and hungry. That fire that used to burn is even bigger. So I’m definitely far from done, and I think this is a whole new beginning for me.”

To sit there and watch that many shows go by and not fight, it’s really tough. But everyone’s been super supportive and everywhere I go, people come up and shake my hand and show support and they’re excited for my return. So it makes me feel good to know that I haven’t been forgotten.”

“I love how he pressures and comes forward, he looks for the finish, and he’s not a boring fighter. He’s not gonna try to hang on to me or win a decision, and I think it’s gonna be a great matchup for the fans. He’s the perfect fight to showcase that I am back.”